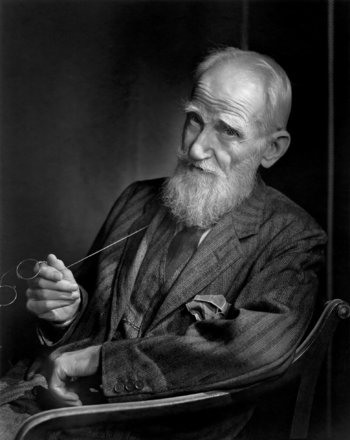 His best-known plays include Pygmalion, Arms and the Man, Mrs. Warren's Profession, Man and Superman, The Devil's Disciple and Saint Joan.

Shaw is the only writer to have been awarded both the Nobel Prize in Literature and an Academy Award (the latter for the screenplay of the 1938 film adaptation of Pygmalion).

His will funded a contest to create a new non-Latin alphabet for the English language. Four of the winning entries were combined to create the Shavian alphabet

, which first appeared in 1962 in a special edition of another Shaw play, Androcles and the Lion.

The Irish Navy has decided to honour his legacy by naming a ship after him.

Works by George Bernard Shaw with their own trope pages include:

Other works by George Bernard Shaw provide examples of: