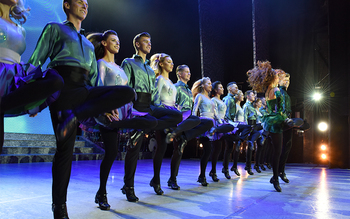 The show has no clearly defined storyline, but broadly speaking the first act deals with various themes from Irish mythology and the second act covers the Great Famine of the 1840s and the Irish diaspora. In keeping with the international themes of the second half of the show, other dance styles are incorporated, including flamenco, tap and Russian folk ballet.

An animated film inspired by the show, Riverdance The Animated Adventure was announced in 2020, set to star Pierce Brosnan as a stepdancing Megaloceros. The film was released on May 28, 2021 exclusively on Sky Cinema.