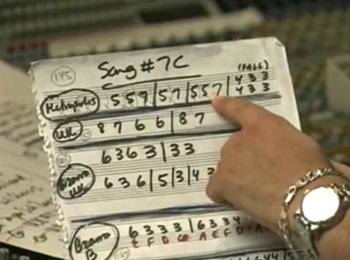 Mike Portnoy going over the time signatures to "The Dance of Eternity". Or as it's called among the band, just another Dream Theater song.
"At this very moment, on stage, we have drummer A playing in 7/8, drummer B playing in 3/4, the bass playing in 3/4, the organ playing in 5/8, the tambourine playing in 3/4, and the alto sax blowing his nose."
— Frank Zappa on "Toads of the Short Forest" – Weasels Ripped My Flesh.
Advertisement:

In music, the most encountered time signature is 4/4, boring old Common Time. There's also 2/4 and 2/2 ("cut time"), which aren't much different - all the bars still divide evenly into two, which makes these useful meters for marches; two beats per measure equals one measure per pair of steps. 3/4, sometimes called "three-quarter time" and the canonical meter for waltzes, is also fairly intuitive - if you've ever been taught to waltz by counting "step, two, three, step, two, three" then you know how it works. Regular time signatures are divided into the categories of 'simple' and 'compound' time. Simple has each beat divide into two, compound has each beat divide into three. 4/4 is referred to as 'simple quadruple time' (4/2 would also be this), 2/4 is 'simple duple' (along with 2/2, 2/1, 2/8, you get the idea); 6/8 is 'compound duple' (equivalent to 2/4 in simple), 9/8 'compound triple' (equivalent to 3/4) and 12/8 compound quadruple (equivalent to 4/4). Note that 9/8, depending on how it is divided, can be either an example of this trope or compound time.note within a note 9/8 is by far most commonly seen in its compound triple form, where three beats of dotted crotchets divide into three quavers each.

Music in Uncommon Time, however, does away with regular meters, and instead opts for totally unconventional rhythms that are often based on higher prime numbers, or at least that are not divisible by two or three. This can be done by choosing an oddball time signature such as 5/4 or 7/8 (most common of the irregular meters) and/or by switching time signatures rapidly. It can be done throughout the length of an entire song, or used as an effect in an otherwise common-time song.

For those who have difficulty determining the meter of a song, try paying attention to its percussion track: In many songs the bass and snare drums are perfectly timed with each beat, because this establishes a metronome that the other singers/players rely on to keep their parts of the song in sync to. This, of course, does not help when the song uses polyrhythms (that is, having different instruments playing in conflicting rhythms that are not readily perceived as deriving from one another, or as simple manifestations of the same meter), as bands such as Meshuggah are known for.

This trope is heavily associated with the Math Rock, Progressive Rock, Progressive Metal, and Technical Death Metal genres, to the point where there are only a handful of prominent acts in any of these genres who have never used it. It is also incredibly common in modern Classical Music, which is often credited as being due to the influence of Igor Stravinsky, particularly in The Rite of Spring. (Stravinsky was a rather large influence on many of these prog groups as well). By virtue of being strongly influenced by both progressive rock and classical music, it's also noticeably common in video game soundtracks.

It should be pointed out that this trope only documents measures with unusual time signatures. It does not cover phrases — IE, groups of measures — that follow unusual patterns. A perfect example of this is OutKast's "Hey Ya

": while it does have an unconventional 6-bar phrase in its chorus, and while those bars involve 3 bars of 4/4 ((Beat) "My baby don't / mess around, because she / loves me so, this I—"), a bar of 2/4 ("—know for—") and two more bars of 4/4 ("—suuuuuuure..."), none of the bars themselves are in Uncommon Time, thus failing to qualify for this trope. And while a 6-bar phrase is less conventional than a 4-bar phrase, that would fall under a different trope (or be too meaningless to trope). Also, while you could try to Square Peg, Round Trope the song into this trope by claiming it's secretly in 22/4, any experienced musician can tell you how unwise that would be. When reading sheet music, musicians rely on bar lines as a visual navigation aid. The phrase can be expressed as one long measure, just like you can write things as a Wall of Text with No Punctuation Period, but that doesn't mean you should.