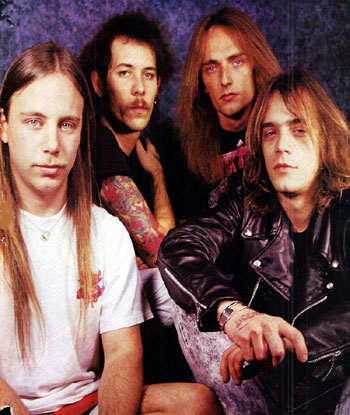 I don't think you understand.
Advertisement:

Atheist is a Progressive Death Metal band from Sarasota, Florida. Indeed, a pretty good argument could be made that they are the Prog Death band. In a sub-genre obsessed with brutality and authenticity, it may be surprising that one of the most acclaimed bands is a difficult, jazz-influenced band, but nevertheless, Atheist is one of the few bands that is regarded by almost all metalheads as genuinely great.

Atheist formed in 1984, first as Oblivion, and later as R.A.V.A.G.E. At this point their sound had a great deal more in common with Thrash Metal than Death Metal, which didn't even really exist yet. Nevertheless, traces of their Jazz influence could still be found in the music of that era. They released their first album, Piece of Time, in 1990. By this point, they had established their signature style of Death Metal/Jazz Fusion. While they were critically acclaimed and highly influential, early audiences expected them to sound more like Cannibal Corpse, which they toured with at least once, and they were frequently booed by said audiences.

While they were recording their second album, Unquestionable Presence, their bassist, Roger Patterson, was killed in a car accident. While they had a number of demos already recorded, the album was far from complete, and they needed another bassist. They had no choice but to recruit Tony Choy, who had also worked with Cynic, in order to record this album. Widely regarded as a classic, both the original recordings and the new ones, Unquestionable Presence is arguably their best-received album, in which the Death Metal and Jazz influences were roughly equal.

Before finally breaking up in 1993, Atheist recorded one last album for contractual purposes. Elements, released in 1993, was perhaps even more important to Progressive Death Metal than their previous albums. Released alongside Death's Individual Thought Patterns and Cynic's Focus, it made 1993 a very good year for Tech Death. Upping the Jazz influence, it even contained an instrumental with no metal influence (Samba Briza), though it still managed to rock every bit as hard as anything before it. The band broke up after releasing it, by this point widely regarded as one of the finest Metal bands of their day, both by old-school purists and fans of the emerging technical / experimental genres that would develop during the '90s and beyond.

Lyrically, Atheist had little in common with their contemporaries, and anticipated many more contemplative Metal bands. By Unquestionable Presence, their lyrics looked to the future, to ethereal and esoteric imaginings no doubt influenced by marijuana. Elements, on the other hand, focuses on nature, and specifically, on descriptions of various so-called elemental forces, though not limited to traditional ones. In this respect, they are perhaps more similar to ambient Black Metal bands such as Wolves in the Throne Room or Drudkh, which deal quite often with nature, than they are to other Death Metal bands, which focus on gore and brutality far more than natural elements.

The band has gotten back together, and released a new album in 2010, called Jupiter. It's noticeably heavier than their older albums, but other than that, nothing's really changed. The band's fifth album has been in Development Hell for years; they announced it in 2014, and as of 2018, they're still working on it. Kelly Shaefer has confirmed that former bassist Tony Choy is returning for the new album, though he is apparently out as of 2018 (and was eventually replaced by Yoav Ruiz-Feingold in 2019), and Steve Flynn has also become largely unavailable for anything outside of recording. Writing occurred on and off throughout 2019 and 2020, with a new full-length on the horizon at some point.

You can find their Bandcamp here

Not to be confused with, well, Atheism.