Music / Between the Buried and Me 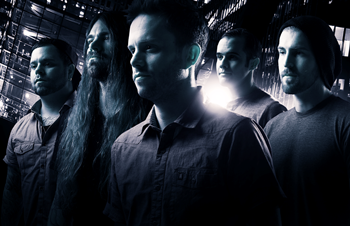 Left to right: Dustie Waring, Paul Waggoner, Tommy Giles Rogers, Dan Briggs, Blake Richardson
"Over and over
Day in, day out
Monotonous drought
We didn't live, we only existed"
—"Revolution in Limbo"
Advertisement:

Between the Buried and Me are a Progressive Death Metal / Metalcore band from North Carolina. While their early sound was primarily that of a contemporary death metal band, their output became increasingly multidimensional with time until the landmark album Colors introduced their now-trademark eclectic sound and complex songwriting.

The band consists of Tommy Rogers on vocals and keyboards, Paul Waggoner and Dustie Waring on guitars, Dan Briggs on bass and Blake Richardson on drums.