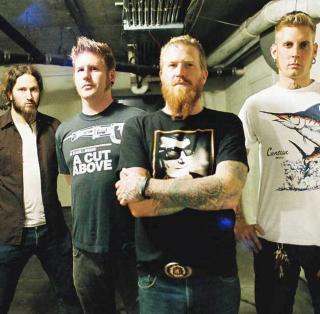 L-R: Troy, Bill, Brent, and Brann.
"Our next guests are a Grammy-nominated rock and roll band from Atlanta and, I won't lie to you, I'm frightened."
—David Letterman
Advertisement:

In 2002, they released their first full-length album, Remission. This contained such tracks as "March of the Fire Ants" and "Crusher Destroyer" which was featured in Tony Hawk's Underground. Their real breakout came in 2004 with the release of Leviathan, a concept album based on Moby-Dick that catapulted them into the mainstream. It includes their most popular song, "Blood and Thunder."

Two years later, they released Blood Mountain, which many critics called the best metal album of 2006. In 2009, they completed their fourth studio album, Crack the Skye, continuing their string of well-received albums. It featured a slightly softer feel, but it was even more complex and progressive than their previous albums. A fifth album, The Hunter was released in September 2011, once again to strong critical reception. Once More 'Round the Sun was released in June 2014. Emperor of Sand was released in March 2017. Hushed and Grim was released in October 2021.

Interestingly, all their albums have also been themed around the classical elements. Remission is Fire, Leviathan is Water, Blood Mountain is Earth, Crack the Skye is Aether and The Hunter is wood. Additionally, the last song on each of their first three albums has to do with Joseph Merrick, also known as the Elephant Man. All four members sing live.

In January of 2018, the band won their first Grammy Award; winning the Best Metal Performance category for their song "Sultan's Curse"

, which was released on their Emperor of Sand album. It was notably their first non-single to be nominated for such award. It was also a feat that their songs "High Road", "Curl of the Burl", and "Colony of Birchmen" failed to do.note They respectively lost to Tenacious D's cover of 'The Last in Line' (2015), Foo Fighters' "White Limo" (2012), and Slayer's "Eyes of the Insane" (2007).

By the way, yes, Mastodon is the band that Squishy's mom was listening to in that one scene in Monsters University (specifically "Ísland").