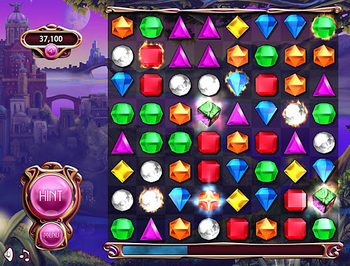 Seriously, it's a puzzle game you've probably heard of. Click on jewels in a field of jewels. Two adjacent jewels are switched. If you get a row (or column) of at least three of the same jewels together, your score goes up.

This was originally called Diamond Mine, until Microsoft suggested the new name to avoid confusion with another flash game Diamond Mines. The game was (and still is) very successful, and it was so successful that numerous Product Placement versions of the game were created.

Renowned as one of the greatest casual games ever; it is constantly ripped off and constantly played. Has officially been completed

, because someone finally legitimately hit the Cap.

Not to be confused with the trope Gem-Encrusted, or the index Bejeweled Tropes.

No more moves... (all onscreen gems vibrate and then fall off the board)