And Some Other Stuff 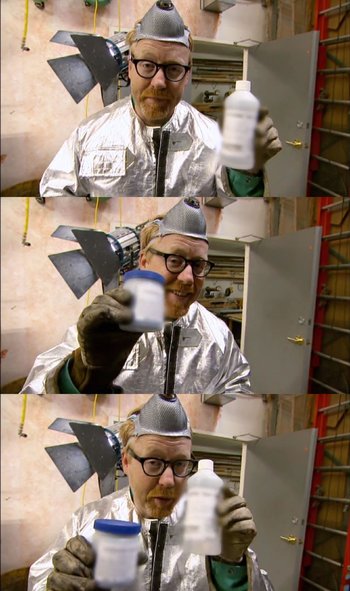 "This ingredient is made of Blur.
And this has some Blur in it, too.
Blur is very dangerous;
you don't wanna mix Blur with Blur."
Victor: What's that, brake fluid? Diethylene glycol isn't gonna burn fast enough to do anything!
Michael: [taping bottles together and tossing them out a car window] It will, if it's mixed with chlorine dioxide, and some other stuff.
— Burn Notice, "Lesser Evil"

Not all writers think Viewers Are Morons. Still, they don't want to teach their audience how to make bombs. Something about "not wanting to be responsible for the deaths of hundreds of innocent souls." Wimps?

So, to avoid liability issues and criminal charges, some critical ingredient for the explosive is removed, replaced (with something less volatile) or referred to vaguely (as "stuff", "my secret ingredient", or similar.)

Speculative Fiction will usually make the "other stuff" Unobtanium or some real life substance that the average person is highly unlikely to ever come across (e.g. Uranium, Antimatter). See also Don't Try This at Home.

This wasn't always the case. One educational TV show for kids that was about rock quarries and marble, mentioned that to break the rock apart they used an explosive made of diesel fuel and fertilizer, now commonly known as ANFO.

Compare Secret Ingredient, which is about being tasty rather than explosive. Contrast Noodle Implements, where you know exactly what's going to be used, and absolutely nothing about how.