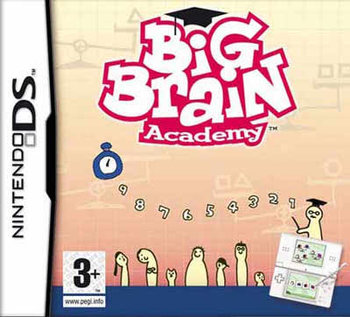 Does your brain have the right weight?
Advertisement:

The first Big Brain Academy game was released to promote the Nintendo DS Lite and later a sequel was released for the Nintendo Wii with the option to compare scores with others around the world. This series of games gives timed quizzes and puzzles to players in an effort to determine their brain mass. Comparisons with Brain Age were inevitable but between the two, Big Brain Academy takes your mental measurements less seriously, being more focused on playful jabs at the player's expense and pushing them towards earning high scores.

On September 2, 2021 a new installment named Big Brain Academy: Brain vs. Brain was announced for Nintendo Switch with a release date of December 3, 2021. The sequel includes co-op play with two players competing at once along with the ability to post high score data online as ghost data.