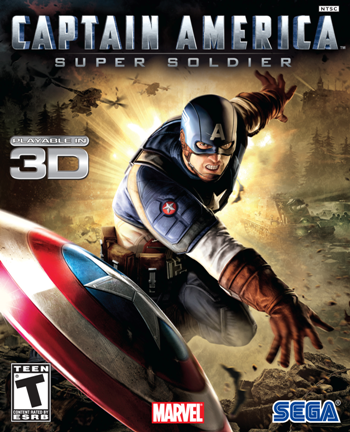 "You have inspired me, Captain. Your powerful symbolism. How your inferiors follow you like sheep..."
— Arnim Zola
Advertisement:

A 2011 video game adaptation based off the Marvel Studios film Captain America: The First Avenger. It takes place during the film, expanding on the adventures of Captain America against HYDRA. The gameplay is deliberately styled after Batman: Arkham Asylum, with most of the fun relying on the fact that you play as the shield-slinging Captain.

Notably, Chris Evans, Sebastian Stan, and Hayley Atwell reprised their roles for the game. Evans was so impressed by the gameplay that it inspired him and Joe and Anthony Russo to give Cap a more dynamic fighting style in Captain America: The Winter Soldier.

The game itself is not canon to the Marvel Cinematic Universe, despite being an adaptation of The First Avenger.