Theatre / The Subject Was Roses 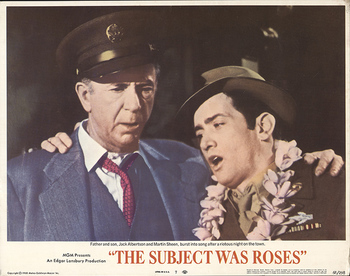 The Subject Was Roses is a 1964 play by Frank Gilroy.

The Bronx, 1946: Timmy Cleary, son of an Irish Catholic family, comes home after three years away fighting in World War II. His parents, Nettie and John, are naturally thrilled to have him back; Nettie makes him his favorite breakfast, while John skips a business meeting to spend a day out with his son. But there are problems lurking beneath the facade of domestic contentment, and soon enough, various hidden resentments — chiefly arising from Nettie and John's failed marriage — come bursting forth.

The original Broadway production featured Jack Albertson and Irene Dailey as John and Nettie and a young Martin Sheen in the big break of his acting career as Timmy. In 1968 the play was adapted into a film directed by Ulu Grosbard. Albertson (who earned an Academy Award for Best Supporting Actor) and Sheen reprised their roles, with Patricia Neal, in her first film after suffering a series of strokes, playing Nettie. Frank Gilroy adapted his own script for the screenplay. Judy Collins sings two songs on the soundtrack.

In a 2010 revival Sheen played the father, John.