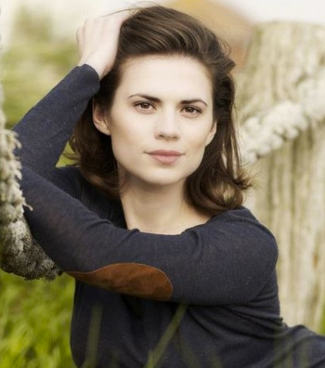 "Ultimately, if you have talent, it will always be there. If you depend too much on your beauty or a visual presence in films, you’re in for a shock when people don’t want you any more because they only wanted you for one thing."
Advertisement:

Hayley Elizabeth Atwell (born 5 April 1982 in London, England) is an English-American actor. Her mother is English, and her father's American of Native American/Irish ancestry.

She's best known for her role as Peggy Carter in the Marvel Cinematic Universe. Before gaining fame from her turn at Peggy in Captain America: The First Avenger, she took part in films like Cassandra's Dream, Brideshead Revisited, The Duchess, and theater productions such as A View from the Bridge and Prometheus Bound.

Tropes that apply to Atwell's works include: