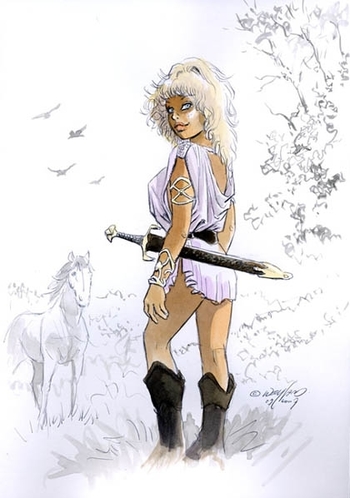 Aria is a Dark-Skinned Blond warrioress who lives in an Alternate Universe that functions a lot like a Medieval European Fantasy, more precisely in Medieval Spain or Portugal, given the look of the buildings in The 'Verse.

A war orphan, Aria survived by the skin of her teeth as a little girl, first being given as a sacrifice to a malevolent water goddess and then being taken in by a league of bandits constituted mainly of other orphans. The league was headed by an abusive caretaker who taught his wards how to pilfer property and pickpocket people. Boys were supposed to become large scale bandits, girls were supposed to become prostitutes, which made Aria quite averse to men and sexuality as a whole. One night, after escaping from the league's estate, Aria starts a new life as a Knight Errant whose main goal is to remain free at all costs. Free to go wherever she pleases, free from men, free from societal rules and offering her help wherever she sees injustice.

The series is a clear example of a Feminist Fantasy and can be quite Anvilicious about it at times, despite developing many themes.

The series is still ongoing to this day. It is not to be confused with the manga of the same name.