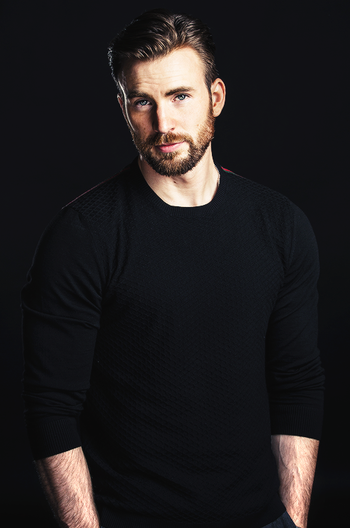 "I love acting. It's my playground; it lets me explore. But my happiness in this world, my level of peace, is never going to be dictated by acting. My goal in life is to detach from the egoic mind."
”So at this point, why not just ACTUALLY give him the Shield and name him King of America?
— Bob Chipman
Advertisement:

So. You got yourself onto Chris Evans' page.

Christopher Robert "Chris" Evans (born June 13, 1981 in Boston, Massachusetts) is an American actor who was initially known for playing smart alec and pretty boy types, including the desperate everyman protagonist Ryan in Cellular, Johnny Storm aka The Human Torch in the Fantastic Four (2005) movies, and "Harvard Hottie" in The Nanny Diaries. And if you're old enough, you probably first remember him from Not Another Teen Movie, which shows he's surprisingly really good at comedy.

Though he's never shied away from more serious roles (Sunshine, Push, London, Fierce People, The Loss of a Teardrop Diamond), it was still a great surprise to the mainstream public when Marvel announced him as their choice to play the straitlaced and serious-minded Captain America in their Marvel Cinematic Universe. Of course, despite Playing Against Type, he made such a splash on Captain America: The First Avenger, The Avengers and Captain America: The Winter Soldier (particularly the latter. As Honest Trailers put it, "Who knew Captain America was so cool?!") that he became the Marvel Cinematic Universe's answer to Christopher Reeve, becoming inextricably associated with the character (the fact that his occasional measured but outspoken interventions on matters of politics and social justice are pretty in-character for the character didn't hurt). In other words, he developed a whole new acting 'type'. As a result, he felt the need to start Playing Against Type again, which he did by becoming the psychopathic hitman Mr. Freezy in The Iceman and the gritty Anti-Hero Curtis in Snowpiercer in 2013. In 2014 he made his directorial debut with the romantic-comedy film Before We Go. He confirmed in a profile for The Hollywood Reporter’s April 2019 issue that Avengers: Endgame would be his last time playing Rogers.

Not to be confused with the British DJ and TV presenter who was married to Billie Piper, nor with fellow MCU Chrises Hemsworth and Pratt. He is the older brother of actor Scott Evans; no relation to Welsh actor Luke Evans. His is also the nephew of former Massachusetts congressman Mike Capuano.

Between playing Captain America, Johnny Storm, Lucas Lee in Scott Pilgrim vs. The World, Jensen in The Losers, Casey Jones in TMNT and Curtis in Snowpiercer,note based on a French comic Evans has perhaps portrayed the largest amount of distinct characters in comic book film adaptations.