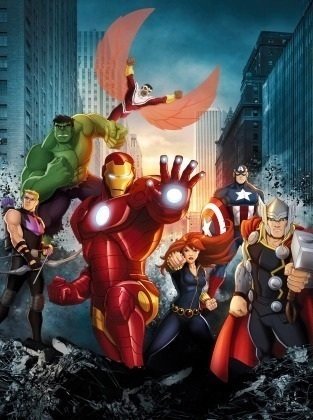 Avengers Assemble is an American animated series that premiered on Disney XD's Marvel Universe block in 2013. Based on the long-running Avengers comic book franchise and inspired by the success of the live-action Avengers movie, the show uses a cast and designs similar to those seen in the Marvel Cinematic Universe. It's not quite an Animated Adaptation of the movies (they never reference events from it), more a series that just takes cues from it. It is set within the same universe as Ultimate Spider-Man (2012) (Or least it was, the last two season suddenly switched over to being connected to Marvel's Spider-Man with no acknowledge to the former show. Your guess is as good as ours how that works.)

The series was launched as a replacement for the fan-favorite animated series, The Avengers: Earth's Mightiest Heroes!, and doesn't reference the events of that show in order to make Assemble accessible to new viewers. Joe Casey, Joe Kelly, Duncan Rouleau and Steven T. Seagle of Man of Action Studios were served as executive producers of the first season, and became as consultants in the second season.

In keeping with the influence of the movie, the show features an Avengers line-up consisting of Captain America, Iron Man, Thor, The Incredible Hulk, Black Widow and Hawkeye. The Falcon appears as the team's seventh member, the only Avenger not present in the movie (though he does join the Avengers proper in Avengers: Age of Ultron as one of newest recruits).

The second season premiered on September 28. The show’s second season picks up where the first left off and see the titular heroes going up against the mad titan himself, Thanos, as well as Ultron and the Squadron Supreme in the latter episodes. The season also sees Ant-Man join the team, as part of a promotion for his solo film.

The third season was titled Avengers: Ultron Revolution, capitalizing on the success of the Age of Ultron movie and gradually building up to a Civil War adaptation to tie in to Captain America: Civil War. Black Panther, Captain Marvel, and Ms Marvel have guest spots in the season.

A fourth season was announced at the 2016 San Diego Comic-Con and aired on the June 17th of that year, titled Avengers: Secret Wars, where the team goes missing and Black Panther must form a new team in their absence, featuring Ms. Marvel, Captain Marvel, The Vision, Ant-Man, Wasp, and the Jane Foster version of Thor.

The fifth season was titled Avengers: Black Panther’s Quest, to cash in on the success of Black Panther. The season focuses on T’Challa being stuck between his duties as an Avenger and his duties as the king of Wakanda. This also being a rather surprising first for a Disney cartoon (Most Disney shows never really go past four seasons. Especially their animated ones.)

It was eventually confirmed

by the voice actors that season 5

is the last season of the series. The series ended on February 2019 at 126 episodes.

A character sheet is currently under construction.

Not to be confused with the comic book series of the same name, the Market-Based Title for the UK release of the movie, or the trope named for the show's source material.