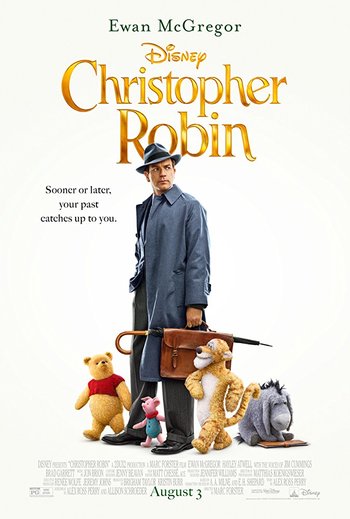 Out of the Wood and into the City
"Perhaps it's our turn to save Christopher."
— Winnie-the-Pooh
Advertisement:

Christopher Robin is a 2018 Walt Disney Pictures fantasy film directed by Marc Forster, with a screenplay written by Tom McCarthy, Alex Ross Perry, and Allison Schroeder. It was released on August 3, 2018.

The story is based on A. A. Milne's Winnie-the-Pooh, and is the franchise's first live action film adaptation. Christopher Robin, the human friend of Winnie-the-Pooh, is now all grown up, and he has lost all sense of imagination. It's up to Pooh and his friends from the Hundred Acre Wood to re-enter Christopher's life and help him find it again.

Cast
The film boasts an All-Star Cast, replacing the usual voices of Christopher Robin's childhood friends with the notable exceptions of Jim Cummings and Brad Garrettnote who voiced Eeyore just once before in one of the CD-ROM games of the 90s as Pooh, Tigger and Eeyore with some of the UK's most talented actors.

The residents of the Hundred Acre Wood are performed by:

The castle turns into a sketch resembling E.H. Shepard's illustrations.

The castle turns into a sketch resembling E.H. Shepard's illustrations.