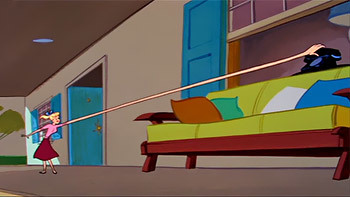 A gag very common in The Golden Age of Animation, involving the use of Toon Physics. Somehow, one character always has a fist which can stretch across the entire room. Or the entire country. Or the entire universe. No matter the length, it's a quick gag where a character extends their arm(s) to grab or hit something far away. There are similar gags with extendable legs and the like, but arms are the most common.
Advertisement:

Not to be confused with Rubber Man. Compare Eye Pop. Usually doesn't overlap with Creepily Long Arms, which are a permanent biological feature.

If you're looking for the trope where a character has this as an actual ability, see Extendable Arms.

Gonzo's arm gets stretched from catching a cannonball.

Gonzo's arm gets stretched from catching a cannonball.