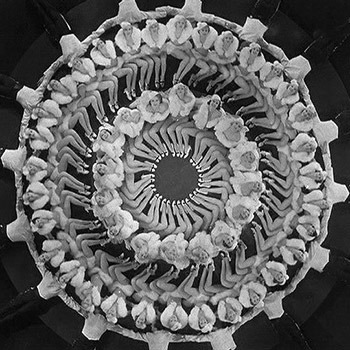 Even when sober, this is really trippy.
Advertisement:

Know all those big, splashy musical numbers with elaborate sets and precise, fancy choreography that are a key memory of The Golden Age of Hollywood? They came largely from the mind of one man. He basically brought the Rule of Cool to musical theater.

Busby Berkeley was a former theater actor who served in World War I as an artillery lieutenant. There, he learned how to get large groups of people to move in sync. This helped him when he went to Broadway and set up some of the most elaborate dancing numbers in the history of theater, with only Florenz Ziegfeld coming close. When he went to film, he topped even that, thanks to cameras being able to shoot where people couldn't sit, using more Chorus Girls than could ever fit on an ordinary stage. (In 1971 he was once again credited on Broadway for choreographing the revival of No, No, Nanette, but this was In Name Only.)

One of his trademarks was to drill a hole in the ceiling to take direct shots of the dancers from above (before Orson Welles made the camera lower with a hole in the floor) while they moved in intricate patterns.

But that's just some of the crazy things he did. Watching his numbers is a visual treat, even for those not into musicals.

Naturally, today, musicals are likely to have homages to him, especially in Disney Acid Sequences.

at The Other Wiki): scenes done in pools, featuring wonderful examples of synchronized swimming. Usually with several female swimmers standing in a row on the left side of the screen and jumping in the water sideways to the right. Traditionally the camera then follows them swimming under water and then, in bird perspective forming a huge circle with their floating bodies.

The beginning of the movie Rio features this type of musical number.

The beginning of the movie Rio features this type of musical number.