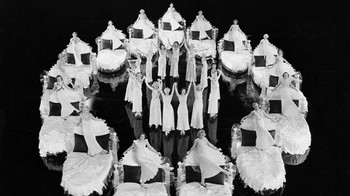 Busby Berkeley!
"What do you go for,
Go see a show for?
Tell the truth, you go to see those beautiful dames."
Advertisement:

Ezra Ounce (Hugh Herbert) is an eccentric millionaire with a strong puritanical streak. He is setting out to distribute his massive fortune, and is about to write a $10 million check to his cousin Matilda (ZaSu Pitts) and her husband Horace (Guy Kibbee). However, Ezra won't write the check if Horace and his family aren't up to his high moral standards. He has already cut off his distant cousin Jimmy (Powell) for working in the musical theater, which Ezra finds offensive more than all other sins. What neither Ezra nor Horace knows is that Horace and Matilda's daughter, Barbara (Keeler) is in love with her distant cousin Jimmy, and is going to be in his show.

Meanwhile, Horace has an awkward train encounter with a starlet named Mabel (Blondell). He doesn't sleep with her or anything, but it's sufficiently embarrassing for Mabel to blackmail Horace into backing Jimmy's show—which Ezra is plotting to disrupt with a horde of Mooks.

All of this, of course, is only an excuse to have a lot of ornate Busby Berkeley numbers.