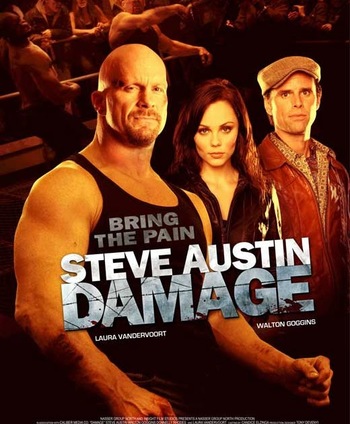 Man #1: Are you sorry for your crime?
John: There isn't a day goes by that I don't think about the man. Not the crime. The man. The state can flip a switch and kill a man. You can use a gun from a hundred feet away. Or you can poison a man dead and never look him in his eyes. To take a human life with your own two hands is the most soul-crushing thing a man can do. It changes you in a way I can't really explain.
Advertisement:

Damage is a Direct to Video action film directed by Jeff F. King and starring "Stone Cold" Steve Austin, Walton Goggins, Laura Vandervoort and Lynda Boyd. It was released in October 5, 2009 in the UK and January 28, 2010 in the US (where it received a brief theatrical run).

John Brickner (Austin) has been paroled from prison after a four-and-a-half year sentence for second degree manslaughter, having killed a man named Matthew Reynolds in a fight. Once released, John gets two jobs: one as a construction worker and the other as a bouncer in a bar after saving barmaid Frankie (Vandervoort) from drunk perverts. Frankie's boyfriend Reno Paulsaint (Goggins), is a manager for illegal underground fighters. Impressed with John's fighting skill, Reno wants John to fight for him. John declines Reno's offer, despite the promise of a six figure prize if he makes his way to the top.

John meets up with Matthew's widow Veronica (Boyd) who arranged for John's parole because she needs help raising money for her daughter Sarah's heart transplant, as they are poor and Medicaid does not cover such an operation. The surgery costs $250,000, money that John does not have. After being unjustly fired from his construction job, John decides to take Reno up on his offer and fight for the money needed to save Sarah's life. But Reno has a lot of enemies he owes money to and John finds himself having to clean up Reno's messes along the way, with each one taking him further away from Sarah's new heart.

Not to be confused with Damage, a 1992 Psychological Thriller by Louis Malle.