Film / The Curse of La Llorona 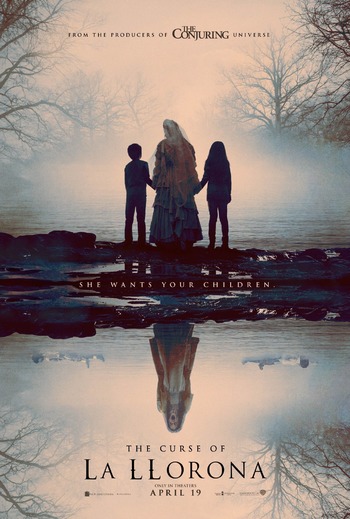 "Have they felt the sting of her tears? They will. Soon. And she will come for them."
Father Perez: Children are told to behave, listen to their elders, or La Llorona will come and steal them away.
Anna: So it’s a folktale?
Father Perez: To some.
Advertisement:

The Curse of La Llorona is a 2019 supernatural horror film and which serves as the sixth entry in The Conjuring Universe* see Exiled from Continuity in the Trivia section of horror films. The film stars Linda Cardellini, Raymond Cruz, and Patricia Velásquez. Set in 1970s Los Angeles, it tells the story of a social worker named Anna Garcia who is called to investigate a series of child abductions. Anna finds herself marked by the legendary La Llorona, otherwise known as the "Weeping Woman" who will stop at nothing until she claimed Anna's children as her own.

Not to be confused with the 1963 Mexican horror film (also based on La Llorona) The Curse of the Crying Woman, or with the 2019 Guatemalan film La Llorona.