Film / Curse of the Zodiac 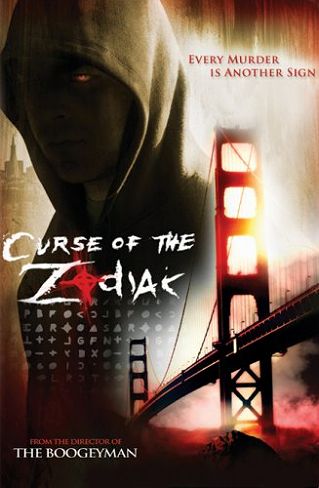 Not a Kaiju.
"Hey, fat fuck. It's me, the Zodiac speaking. Have you figured me out yet? Well, I'm gonna give you a few hints..."
—The Zodiac
Advertisement:

Curse of the Zodiac is a 2007 horror film, written and directed by Ulli Lommel.

In the 1970s, San Francisco finds itself being terrorized by a sadistic psychopath who identifies himself as "the Zodiac" in disturbing phone calls he makes to a writer who is possibly named John, though the Zodiac insists on just calling him "fat fuck" (which gets annoying very quickly). Along with the phone calls, the Zodiac also sends the writer a variety of rant-filled letters, some of them containing bizarre puzzles and codes, which the Zodiac states can help "figure me out" if they are solved, though he seriously doubts anyone "in this dumb fucking city" will be able to best him.

As the writer struggles to find his self-proclaimed nemesis, who is escalating when it comes to blowing out the back of people's heads by cramming gun barrels into their mouths, a young woman named Natasha Baines (a name which is only revealed just before the credits) is plagued by trippy visions relating to the Zodiac and his victims. At first, the visions only occur while Natasha is asleep, but they eventually begin coming to her while she is awake, growing in intensity each time. Possibly due to possessing powers himself, the Zodiac starts communicating with Natasha during her visions, threatening her and taunting her inability to stop him as she is forced to watch as he slaughters innocent people in front of her. Shortly before her boyfriend leaves her due to the strain caused by her uncontrollable gift (or maybe curse would be a better description) Natasha meets with the writer when the two of them just happen to stop by a police station to offer they're help in catching the Zodiac, only to be ignored. Together, the two decide to bring down the Zodiac, hopefully before he makes due on his promises to add them to his ever increasing list of victims.

Ulli Lommel's second film about the infamous Zodiac Killer, this one, like its predecessor, has little in common with the real-life murderer, probably only being made to try and cash-in on David Fincher's adaptation of Robert Graysmith non-fiction book Zodiac. Aside from the setting, the killer's nickname and some of his MO, it's pure schlocky, cheaply produced fiction consisting of somewhat poor acting, so much excessive profanity it would make a sailor blush, and extremely schizophrenic, crazy editing and filming.

Reception has been poor... very, very poor, to put it nicely.