Film / The Curse of the Werewolf 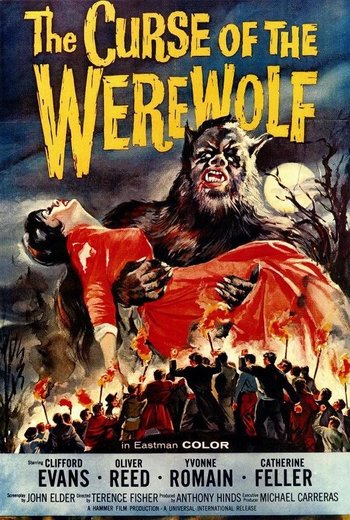 Curse of the Werewolf is a 1961 British horror film directed by Terence Fisher. Surprisingly, it is the only werewolf movie produced in the entire run of Hammer Horror films. Based on the 1933 novel The Werewolf of Paris by Guy Endore, the film changes the setting to Spain. It is notable for its heavy tones of melodrama and emotional conflict.

Born on Christmas Day, Leon (Oliver Reed) is the child of a poor serving girl raped by a mad beggar (who himself was driven insane by a nobleman's cruelty). As he grows up, it appears that Leon inherited a terrible curse from the tragic circumstances of his conception, and only true love may be able to save him.

The film contains examples of these tropes: