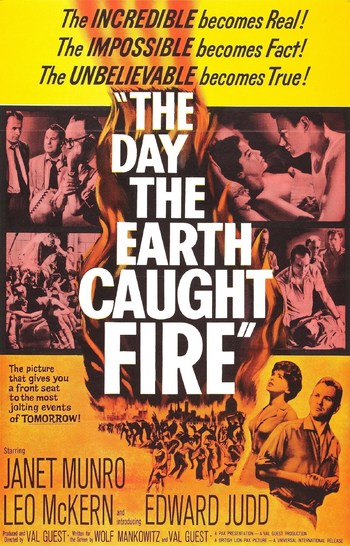 "It is exactly thirty minutes since the corrective bombs were detonated. Within the next few hours, the world will know whether this is the end or another beginning. The rebirth of man or his final obituary. For the last time, man pursued his brother with a sword, and so the final fire was kindled. The Earth, that was to live forever, was blasted by a great wind towards oblivion. It is strange to think that barely ninety days ago..."
—Peter Stenning
Advertisement:

The Day the Earth Caught Fire is a BAFTA-winning 1961 British science fiction film directed by Val Guest, starring Edward Judd, Leo McKern, and Janet Munro. Co-written by Guest with Wolf Mankowitz, it's regarded as one of the best apocalyptic films to come out of the '60s and a classic in the genre.

The story, told in flashback, is set in the aftermath of an atomic bomb disaster: it seems the United States and the Soviet Union conducted near-simultaneous bomb tests on opposite sides of the globe, knocking Earth off its axis. Peter Stenning (Judd), an alcoholic reporter for the Daily Express in London, is stressing through a messy divorce and is struggling to find a newsworthy story to be taken seriously, although that's down to the sabotaging work of his editors, who are annoyed with his deteriorating attitude. However, Peter manages to get his friend and colleague Bill Maguire (McKern) to ghostwrite for him.

News soon hits that the USA and the Soviet Union have activated atomic bombs and Earth begins to drastically change. The Earth's axis shifts, global warming begins to make water evaporate, and governments begin to evacuate cities. Peter is sent to the British Meteorological Office to find out how much the temperature has changed, and he meets typist Jeannie (Munro). The two of them fall in love and help each other look for more information, but it's soon revealed by scientists that Earth's orbit has been altered so severely that it's now moving inexorably toward the Sun...