Literature / The Hunchback of Notre Dame 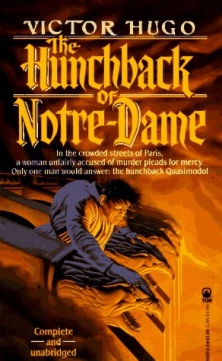 "We shall not attempt to give the reader an idea of that tetrahedron nose- that horse-shoe mouth- that small left eye over-shadowed by a red bushy brow, while the right eye disappeared entirely under an enormous wart- of those straggling teeth with breaches here and there like the battlements of a fortress- of that horny lip, over which one of those teeth projected like the tusk of an elephant- of that forked chin- and, above all, of the expression diffused over the whole-that mixture of malice, astonishment, and melancholy. Let the reader, if he can, figure to himself this combination."
Advertisement:

The other famous novel by Victor Hugo. Written in 1831, Notre-Dame de Paris, known in English as The Hunchback of Notre Dame, is a rich, meandering tale that addresses messy relationships, fate, and the future of architecture in 1482. The English title is a misnomer, since the protagonist of the story is Esmeralda, the original title being a metaphor on the cathedral who serves as the central location of the novel, and Esmeralda herself (though one could argue the cathedral is itself a character). Victor Hugo strongly protested against the English title, as it turns the focus from the cathedral onto the characters.

The hunchback is Quasimodo, the deaf, one-eyed, hunchbacked, monstrously ugly bell-ringer of Notre-Dame Cathedral in Paris. Abandoned outside the church at the age of four, he was taken in out of kindness by the Archdeacon of Josas, Claude Frollo, who raised him in the church and introduced him to the bells.

When the hitherto chaste Frollo sees the gypsy girl Esmeralda dancing in the street one day, he finds himself stricken with lust and doesn't know how to deal with it. So, sure as Love Makes You Evil, he grabs Quasimodo (for muscle) and tries to kidnap her. The attempt is foiled by Phoebus, Captain of the Archers. It is spectacularly not foiled by lovable slacker-poet Pierre Gringoire, who gets knocked out trying to save the girl.

Later that night, however, Esmeralda temporarily marries the poet, to save his life from her friends at the Court of Miracles. That doesn't mean she's going to let her new "husband" touch her, mind you, or that she's going to give up her dreams of marrying Phoebus. Phoebus likes the look of her, himself, and although he's already engaged to his teenage cousin Fleur-de-Lys, he's not opposed to a bit on the side.

Esmeralda's small kindness to Quasimodo when he is in the stocks for the kidnapping attempt (Frollo having let him take the fall) makes her an angel in Quasimodo's mind, and he is henceforth devoted to her. This eventually, and painfully, puts him in conflict with Frollo, whose combination of lust and loathing for Esmeralda makes him increasingly unstable.

Amidst the drama and tragedy resulting from everybody's fatal obsessions, Hugo includes leisurely chapters on the architecture of Paris and the expected impact of the newly-developed printing press.

The novel has inspired many adaptations. Live-action film versions most notably include those of 1923, 1939, and 1956. Other adaptations include a 1982 made-for-TV adaptation, the 1996 Disney animated version (which itself got a Screen-to-Stage Adaptation that was surprisingly accurate to the original novel), and a French-language rock opera called Notre-Dame de Paris.