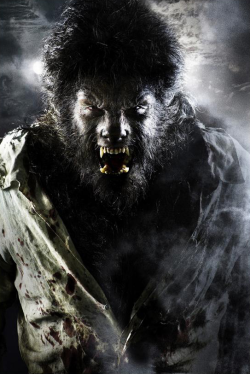 Chewbacca's evil twin.
"Even a man who is pure in heart
and says his prayers by night,
may become a wolf when the wolfbane blooms,
and the autumn moon is bright."
— The Wolf Man (1941)
Advertisement:

Note: While commonly associated with them design-wise, these are not to be confused with werewolves. This is for characters that look like anthropomorphic wolves.

A Beast Man that has canine features, usually featuring the typical fur, muzzle, and pointy ears. They also have tend to have fearsome claws, despite real wolves having blunt toenails instead. Depending on the adaptation, he may or may not have nards.

When they are the good guys, Wolf Men tend to be noble, loyal, and strong essentially being The Big Guy, although what sets them apart is that they tend to be quite intelligent as well. If they are villains, chances are Wolf Men are Always Chaotic Evil with sadistic, bloodthirsty and murderous tendencies. As a result of this, a Wolf Man will usually fight using melee weapons or even bare-handed. And just like their real life counterparts, they also tend to be quite speedy, running either on two legs or four.

An often overlapping sister trope is the werewolf or lycanthrope, a person that can turn into a wolf or a wolflike creature. In older horror films (Universal era up into The '70s), werewolf transformations usually took the form of getting hair and fangs, but otherwise remaining something closer to an ape with vaguely canine features. (The "classic" Wolf Man appearance is not entirely dissimilar to the symptoms of a rare genetic disorder, hypertrichosis.) More recently, sophisticated makeup, prosthetics, and other visual effects allow more wolflike features on humanoids, such as giving a character a wolf's muzzle and ears. Phlegmings are popular for modern versions.

They walk on two feet and still wear remnants of their clothing, but their skin is covered in dark blue fur and they have wolf-like features, including claws on their hands and long canines in their jaws.

They walk on two feet and still wear remnants of their clothing, but their skin is covered in dark blue fur and they have wolf-like features, including claws on their hands and long canines in their jaws.