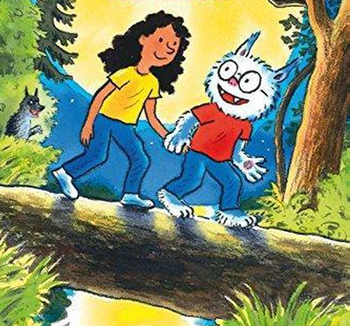 Werewolves are almost always depicted as savage, bloodthirsty monsters that relentlessly stalk their prey during nights of the full moon and have little in the way of morality. However, "almost" is the key word. Some werewolves are friendly and easy to get along with.
Advertisement:

How and why a certain werewolf, or pack of werewolves, acts with kindness varies, although at least some of it may be traced back to mankind's longstanding relationship with dogs. For thousands of years, humans have bred domestic dogs to be friendly, loyal, and obedient. Since werewolves are canine creatures, it's fairly easy to assign them dog-like personality traits (i.e. licking other people's faces, playing fetch, etc.), especially in more comedic works. Another reason for friendly werewolves may just be the recent trend towards portraying traditionally evil or malicious creatures/monsters as benign or even heroic. Yet another reason may be because of wolves being seen in a positive light in recent years, as they became better understood by science.

Can be either Funny Animal or Wolf Man depending on the story.