Running on All Fours 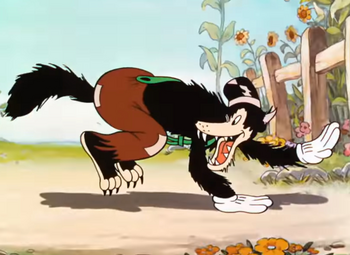 Who's afraid of getting dirt on his White Gloves?
You know how they say "learn to crawl before you run"? Well, this character has learned to do both at once. This character may walk or run on two legs but is absurdly fast and nimble when running on all fours. Though running on all fours for humans is still possible, we've evolved to move faster and more efficiently through bipedal motion (our arms would have to be longer to be really good at it).
Advertisement:

This character though is a bit of a throwback for doing otherwise, and a pretty successful throwback as well because they can run just as fast (if not faster) than on two legs. This atavism is represented by the character being Raised by Wolves, and/or being a Wolf Man or some other sort of Beast Man. On the other extreme a Cyborg or genetically altered character might have this added as an alternate mode of locomotion. Then again, the Stringy-Haired Ghost Girl and other supernatural critters may move this way just for freaky kicks.

Sometimes, Funny Animals and Civilized Animals will assume this stance, whether as part of a Masquerade or not. Sometimes, for them, traveling on all fours is just faster.

This Sister Trope of Primal Stance often involves Ceiling Cling, In a Single Bound, Wall Crawl and Wall Jump. The character can grab onto the roof, jump super high, run on walls and jump from object to object. Civilized Animals and Funny Animals are known to switch to all fours.

The polar opposite of Four Legs Good, Two Legs Better, where a quadruped adopts a decidedly humanoid gait. May constitute a mild example of Bizarre Alien Locomotion. Can be part of an Anthropomorphic Zig-Zag or Furry Reminder.