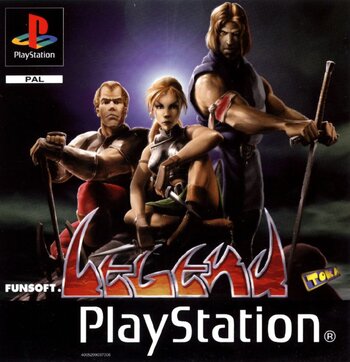 Once Upon a Time, in another world, in another dimension…
The destiny of the universe was played in a battle between good and evil.
The legend would be born…
Sword, and blood.

Legend is a 1998 video game and the sequel to Legend (1994). Unlike it's predecessor, this sequel is made for the PlayStation instead.
Advertisement:

Years have passed ever since the defeat of Prince Clovis. But Beldor the tyrant have returned from the netherworld he's banished from, summoned by a new villain, the Brother of the King of Tovakia, returning into the plane of mortals. And now Beldor's forces are on a rampage across the Kingdom of Tovakia, having captured their wise king and enslaving entire populations along the way.

It's worth noting that this follow-up has more fantastical elements compared to the first, where the mostly human-based mooks from the first game replaced by The Horde, consisting of various beast-men, skeletons, goblins, and gigantic monsters. You can also choose between three heroes - the warrior Axel, the barbarian Karo, and the agile female thief Tara.