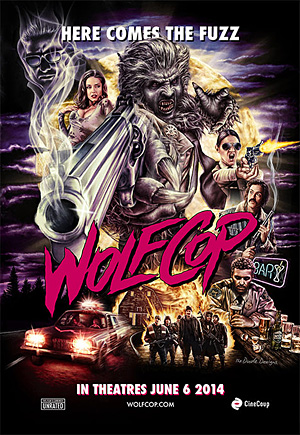 Here comes the fuzz.
A low-budget, high-concept 2014 Canadian horror-comedy made in the style of 80s splatstick films.
Advertisement:

Officer Lou Garou is a burned out alcoholic who couldn't give less of a crap about the crime in his small town, until the night he halfheartedly investigates what he thinks are a bunch of kids partying in the woods, and instead stumbles across a group of hooded figures conducting what seems to be a Satanic ritual. He blacks out and wakes up with a pentagram carved in his torso - and a bad case of lycanthropy. But the werewolf cop isn't just an alcohol-fueled rage monster, he's got a renewed sense of duty and, along with his conspiracy nut friend, starts investigating the town's mysteries and taking a literal bite out of crime...

Wolfcop was the first winner of the CineCoup Film Accelerator, in which indie filmmaking teams begin by submitting a two-minute trailer, then compete with further challenges and gather fan support, with a prize covering $1 million dollars in expenses and a guaranteed opening in Cineplex theaters. The Wolfcop team's obvious skill, enthusiasm for the project and love of the genre won over fans, who eagerly supported its Indiegogo campaign.