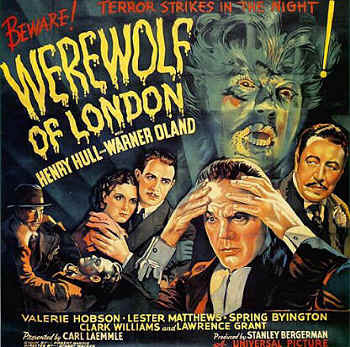 "But, remember this, Dr. Glendon. The werewolf instinctively seeks to kill the thing it loves best."
"Thanks for the bullet. It was the only way. In a... in a few moments now, I shall know why all this had to be."
— Dr. Wilfred Glendon
Advertisement:

Werewolf of London is a horror film released in 1935. Produced by Universal, it is the first werewolf film made in Hollywood.

While searching for a rare plant in Tibet, wealthy botanist Wilfred Glendon is bitten by a werewolf. After the incident he returns home to find his wife, more and more estranged from her neglectful husband, turning in her loneliness to her childhood sweetheart, Paul Ames. Glendon also meets the mysterious Dr. Yogami, who wishes to see the rare plant that Glendon has found, the Marifasa lupina, as its blossoms form the only cure against werewolf transformation – albeit a temporary one. Soon afterward, the remaining Marifasa is stolen and Glendon starts transforming on the nights of full moon. Each night people die and soon Scotland Yard is after him.

Werewolf make-up was designed by the legendary Jack Pierce, who later worked on that other well-known werewolf film, The Wolf Man (1941).

Anyone know the way to Lee Ho Fook's?