Music / Man With a Mission

"Ladies and Gentlemen, We are the MAN WITH A MISSION." 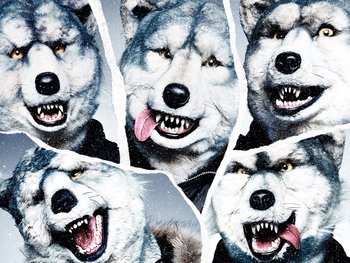 What do you get when you take a group of anthropomorphic wolves that have the backstory of something out of a Saturday morning cartoon plot, give said group some instruments, and let them start a band? Well, the US already did that, but this time they're a Japanese version of that concept.

Said band would be MAN WITH A MISSION, a Japanese Alternative Rock band of five anthropomorphic wolves with both incredible brain power and superhuman physiques.

In the year 19XX, humanity was in a full-on war with itself for wealth and power. Seeing this chaos, a genius biologist named Dr. Jimi Hendrix on an island called "Ladyland" to create the Ultimate Life Form to help save humanity from its greatest threat; itself. Said lifeforms, in Dr. Hendrix's eyes, have the heads of wolves, explaining their appearance. Eventually, they grew a power greater then any single army ever has, but soon were hired by the Principality of Zeon to take on top-secret missions that caused near endless death and destruction.

Doctor Hendrix, seeing this, began to fear his creations. He knew that they were capable of causing some of the most horrible things in history for the time, but he also believed that one day they would bring the end of days. Wracked with guilt, the doctor froze the group within the ice of Antarctica, leaving them with a radio to listen to the music of the modern day to entertain them for the rest of eternity. At least, until 2010, when Global Warming eventually thawed their icy prison, and the group went on a rampage through Tokyo greater then any Kaiju ever has. Not of destruction, however, but of music. And now only time will tell, will they bring our doom...or will they save us from ourselves?

In reality, however, the very much human band was formed in 2010 in Shibuya, Tokyo. To keep up with the band's crazy backstory, however, it's members have created stage names for the wolves.

The band's lineup consists of...

Their music explores a bunch of different genres, usually mixing pop, hard rock, dance, rap, and punk elements. They're mostly known in Japan but have reached a fanbase worldwide with tours the US, Europe, and other Asian countries for both opening acts to popular western bands and their own. They also have received invites to famous music events such as Knotfest (both US and Japan locations) and Download Festival.

They're best known, however, for being the artists behind themes for multiple anime intros, video games, and other products, which include but not limited to...

Man With A Mission contains examples of: