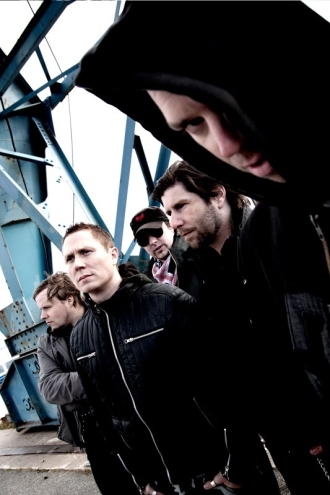 100% win and awesome.
Anyone with their ear to the ground
Knows we will not be bound.
You can push but you can't beat us down
We deliver the sound!
— "Elite"
Advertisement:

Machinae Supremacy is a Swedish band formed in 2000 whose style mixes Power Metal with Electronic Music. They call themselves "SID Metal" because they use the MOS Technology 6581 SID, the synthesizer chip from the Commodore 64. Many of their songs are inspired by anime, Western Animation and Video Games; for example, "The Wired" was based on Serial Experiments Lain, while "Return To Snake Mountain" references Masters of the Universe. Along with the video game influence, they make a point of basing many of their lyrics on themes of self-empowerment, non-conformity and bringing revolution, quality, talent and depth to the mainstream music scene. They've had songs featured in the In the Groove series, are responsible for the soundtrack to Jets'n'Guns and contributed heavily to the Giana Sisters: Twisted Dreams soundtrack.

A lot of their music, including their first studio album (Deus Ex Machinae), is available for free download

, while Overworld, A View From the End of the World and Rise of a Digital Nation are all available for free streaming on their Soundcloud account.

This band shows examples of the following tropes: