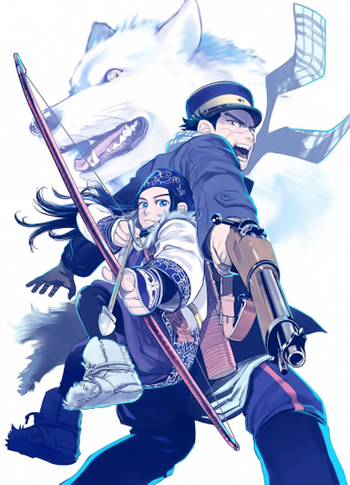 February, 1907. Saichi "The Immortal" Sugimoto is a veteran of the Russo-Japanese War, infamous for his ferocity and ability to survive on the battlefield. Sadly for him, he's discharged without honors and left penniless on the island of Hokkaido, where he hopes to prospect some gold to get his dead friend's wife an eye operation. Unsuccessful, Sugimoto is instead stuck listening to a drunkard's rumors one winter night.

The legend says that, during the heyday of Hokkaido's gold rush, a group of the indigenous Ainu people was preparing to revolt. They had amassed a large quantity of gold to finance their war: 75kg in fact, easily worth 80 million modern yen. However, one Ainu man slaughtered his companions, then hid the gold. Caught by the police and thrown in the infamous Abashiri Prison, that same man chose twenty-four fellow inmates, on each of whom he tattooed part of a map that would lead to the treasure, and told them to escape.

Sugimoto initially dismisses the story, but when the drunkard sobers up the next morning, he tries to kill him. Sugimoto is convinced and gives chase, only to stumble upon a young Ainu huntress, Asirpa, daughter of one of the men murdered for the gold. After fending off a bear attack together, Sugimoto and Asirpa become partners in search of the treasure. However, they are up against several groups of equally fearsome people. Among the Abashiri escapees, former vice-captain of the disavowed and massacred Shinsengumi, Hijikata Toshizo, has gathered followers to piece together the map. Moreover, the Imperial Japanese army's elite 7th Division has gone rogue and, under the leadership of First Lieutenant Tsurumi, is on the hunt for Hijikata and Sugimoto.

Satoru Noda's award-winning manga Golden Kamuy was serialized in Weekly Young Jump from 2014 to 2022, with 314 chapters and 31 volumes. An anime adaptation began airing in Spring 2018; it can be viewed on Crunchyroll with the appropriate regional subtitles, with Funimation doing the English dub track.

As the manga is far ahead of the anime, BEWARE OF SPOILERS BELOW.