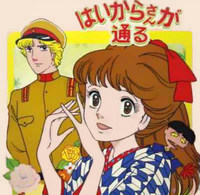 Haikara-san ga Tōru, also known as Smart-san, is a Japanese shōjo manga series by Waki Yamato. It was serialized by Kodansha in the magazine Shōjo Friend from 1975 to 1977, and released in eight volumes. The title can be literally translated into English as Here Comes Miss Modern or Here Comes Miss High-Collar ("haikara" being the Japanese romanization of "high collar"), or Fashionable Girl Passing By. In 1977, it was awarded the 1st Kodansha Manga Award for shōjo. It also has been adapted into an anime series from the late seventies, and then into a film (and eventually a remake film) and some doramas.

The female lead is Benio Hanamura, a young woman living in the Taisho Era. Benio has been raised by a single father, a high-ranked military man, since her mom died when she was a little girl. As a result, much to the despair of Hanamura Sr., Benio is a huge Tomboy: she doesn't want to get married, scoffs at boys, smokes, drinks, likes reading and riding her bike, and her only resemblances in regards to the Yamato Nadeshiko archetype are her looks and her penchant for wearing kimono and hakama. Her best friends are Tamaki Kitaouji, a more girlish but also openminded young woman, and Ranmaru Fujieda, a very girly-looking guy coming from a kabuki background.

At age 17, Benio receives the shock of her life. Her father tells her that she's to be engaged to a man! Benio is horrified, naturally, and even more so when she meets her husband-to-be: Shinobu Iijyuin. He happens to be a guy with whom she had several encounters that day, all tinted with Slap-Slap-Kiss. So Benio is caught in quite the predicament: not only does she dislikes the idea of being in an Arranged Marriage, but she noticed that Tamaki likes Shinobu and she doesn't want to hurt her friend's feelings. Hm, what to do.

Eventually, Benio accepts the engagement — to try scheming against it via telling and showing Shinobu that she's a horrible excuse for a House Wife, so he and his family will hate her and call everything off. Yet not only does Shinobu turn out to be a Nice Guy who has come to like Benio as a person and has a saint-like patience to her blunders, but she finds herself falling for him.