They Have the Scent! 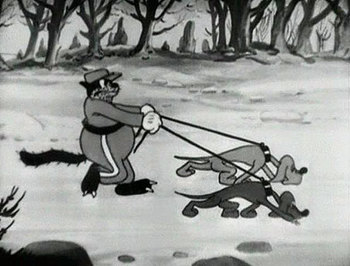 Dogs have been brought out to track some quarry and have been sniffing about. One starts to bay, and the others join it, and they all chase off.

If the dogs are hunting people, they are loud enough to be heard by the pursued, who may be the ones who say this. It indicates that The Chase is about to begin in earnest, and that evasion will not be feasible or require throwing the dogs off. Generally a grim point. And the pursuee will almost always go to water or roll in something disgusting to throw the animals off the scent. (This always works on television. Contrary to what most people expect, it does not work in real life.)

Hunters of either animals or men may also use the Stock Phrase.

This is also used in superhero comics wherein you have a hero with animal powers, or with aliens/fantasy races with strong senses of smell. May be visually represented with Fluorescent Footprints or a glowing "cloud" of scent.