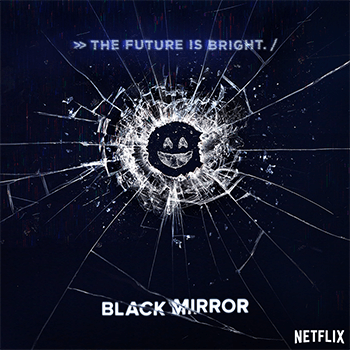 Look at you. Glued to your chair, eyeballs helplessly fixated on your intoxicating, mesmerizing computer screen, the black mirror through which you view the world around you. You've spent countless hours assigning meaningless labels to places that aren't real and people you will never meet, and for what? Perhaps you'd be better off categorizing the tropes of your own life.

Black Mirror is a UK science fiction-horror anthology series produced (and primarily written) by Dead Set creator Charlie Brooker. The series is inspired by The Twilight Zone and is named for the reflection visible in a blackened digital screen. The episodes all explore techno-paranoia and general unease with the world. They are usually set in an alternative present or the near future and often have dark and satirical tones, although some are more experimental and even lighter.

The first series premiered on December 4, 2011, and ended up winning the International Emmy for best TV movie or miniseries. The second series started on February 11, 2013. There has also been a Christmas Special, released in the UK on December 16, 2014. Netflix picked up the third and fourth series, which were released on October 21st, 2016 and December 29th, 2017, respectively. A film, Bandersnatch, was released on December 28, 2018. The fifth series was released on June 5th 2019; the show's future beyond that is currently unclear, as Brooker has said he feels viewers may not be in the mood for more and he has more comedic projects in the works.

Here are the trailers for Series 1

As each episode is set in its own continuity, only recurring tropes can be found on this page. There's a Recap page for the episodes, please put episode-specific examples on the appropriate page.

A literary series of original Black Mirror stories edited by Brooker was planned, but was postponed indefinitely in 2018 due to his lack of time to work on them. Black Mirror Labyrinth, a walkthrough maze at Thorpe Park Resort, opened in May 2021, having been delayed from 2020 by the COVID-19 pandemic.

Recurring tropes throughout the series:

"It's hard to imagine a bright future, but we can and we must."

Example of:
Go Mad from the Isolation