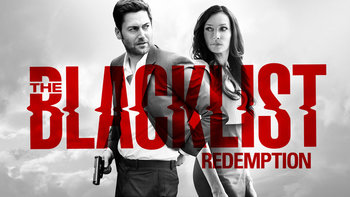 The Blacklist: Redemption is an American crime thriller television series that is a spin-off from the NBC series The Blacklist. It stars Famke Janssen as Susan Scott "Scottie" Hargrave, president of Halcyon Aegis, a private military company with teams of corporate operatives, and Ryan Eggold as Tom Keen, a character from the original series. After airing a backdoor pilot in the form of an episode of The Blacklist, the new series was ordered by NBC on May 14, 2016.

The show starts when Tom makes the decision to go to New York and discuss what will happen to Howard Hargrave's estate after learning that Hargrave is his biological father. However, Howard informs him that he's still alive and he created false information so that the public still believes that he died from a plane crash. Tom joins HA on his father's request, starting with a mission to save a CIA agent who had been kidnapped.

The series premiered on February 23, 2017 and aired until April 13, 2017 with a total of eight episodes. It's not renewed for another season, which brought Ryan back to the Blacklist.

The character page is found here.

The Blacklist: Redemption contains examples of: