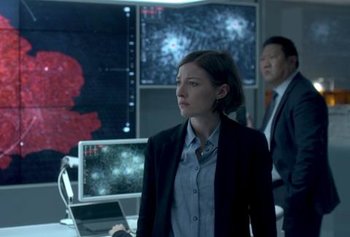 "The government's a cunt, we knew that already."
"I didn't expect to find myself living in the future, but here I fucking well am."
Advertisement:

In the near-future, a police detective in London works with a tech-savvy sidekick to investigate a spate o He responds that it's in the public interest to do so, since the scheme has prevented several mass murders and terrorist attacks. Regardless, any benefit gets negated after Scholes' plan succeeds with nearly 400,000 people dead and the surveillance aspect of the ADI program is now presumably out in the open.[/note]], as well as an article he wrote for The Toast spoofing Black Mirror episode concepts  (which also quoted the tweet.) Doubles as an Inspiration Nod, given that the original tweet inspired the final twist in Playtest, where Cooper is killed by his phone going off at the wrong moment.f mysterious and sudden high-profile deaths linked to a social media hashtag.

Tropes related to Hated in the Nation: