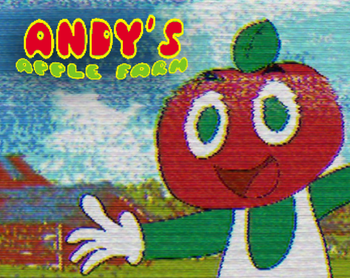 The premise is simple. You, as Andy the Apple, must explore the farm and play mini-games with each of Andy's friends. Beat the games, and you earn bonus stickers that unlock a special prize... the key to your house.

The game is a lot more creepy than the plot would imply. Andy and his friends all have moments of deranged and unnatural behavior, and the game comes complete with some Ominous Visual Glitches, a retraux visual style and sound design, and some really odd looking characters. Gradually, a plot begins to surface involving the developer, Thomas Eastwood, and his troubled family life, as well as a frightening entity that follows him around...

The game is free to play here