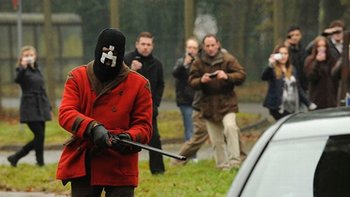 Start running.
"I guess they were always like that underneath. Just needed the rules to change, for no one to intervene."
— Jem
Advertisement:

Awaking without memory of who she is, a woman soon finds an armed, masked man is pursuing her with the intent of killing her. Of course, things wouldn't be as bad if everyone would stop filming it on their phones and help. Trailer here.