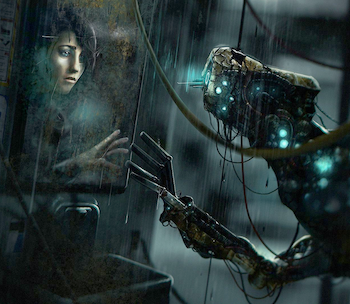 "That is what we are, brother — skin-wrapped bits of flesh, bound to bone by sinew, sparked to life by a universe gone mad."
— Inifere, Torment: Tides of Numenera
Advertisement:

Am I real? Why do I exist? How much control do I have over my own life? What choices do I have? Does it even matter, the choices I make? Am I even a unique individual? Are my thoughts, opinions, memories, experiences, and feelings actually my own, or are they imposed on me? If I were to suddenly die, would my passing go by completely unnoticed and unmourned? Is my entire life pointless? Are my efforts to achieve meaning doomed to failure?

Most stories take a positive stance towards these questions, with characters having a clear identity, and clear goals. Not these, though.

May overlap with Cosmic Horror Story; the horror on those relies more on the perceived vulnerability of reality as a whole, rather than the pointlessness of life on an individual scale. A "Shaggy Dog" Story might induce this kind of feeling. Compare with Angst, which while originally referring to "existential angst", has broadened its meaning to refer to a more general form of anguish or unease with oneself. Compare also with Contemplate Our Navels, which is simply in-universe philosophical contemplation, and doesn't necessarily involve horror or existential questions. Compare with Absurdism which plays woes over the meaningless of one's existence for comedy, rather than horror (though there can be overlap). See Cloning Blues for when clones go through this crisis. The Straw Nihilist and The Anti-Nihilist are related opposite character types.

This is Truth in Television, particularly to people who have depression and other mental disorders.