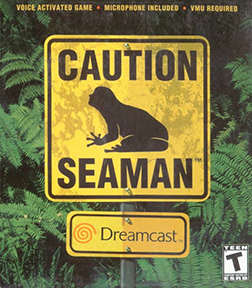 "It'll cost you a buck."
— Seaman, as an adult gillman
Advertisement:

Seaman is a virtual-pet-raising game developed by Vivarium and published by Sega, released for the Sega Dreamcast in Japan in 1999 and localized in 2000. It was re-released for Japan as Christmas Seaman and again as a Playstation 2 port. There were also plans for a PC release that allowed Seaman to interact with and manipulate your desktop and e-mails, but it was eventually cancelled. A sequel was also released, again, only in Japan, for the Playstation 2. The game was one of the few in the Dreamcast library to take advantage of the microphone. It also features narration from Leonard Nimoy in the English version.

You play as a pet owner who had decided to adopt a new, unknown species dubbed "Seaman" by scientist and discoverer, Jean Paul Gasse. The titular creature is a fish-like animal gradually evolving into a frog-like creature with a human face who would eventually be able to talk with you. You start out with a handful of food pellets and a seaman egg to start with where you must hatch the egg and raise the resulting seaman to maturity. You are tasked with checking up on it to make sure it has enough air in its tank, the environment is warm and that they are fed, and eventually you'll be able to converse with the seaman and be asked various questions as you raise it. Although you are left to figure out how to raise the seaman on your own, Nimoy will also give you general hints and tips as you check in on your seaman.