Literature / Johnny Got His Gun 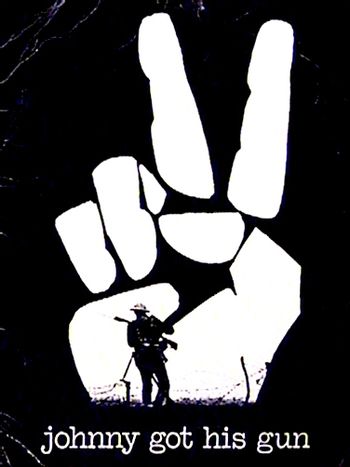 "DARKNESS! IMPRISONING ME! ALL THAT I SEE! ABSOLUTE HORROR!"
"There's nothing noble about dying. Not even if you die for honor. Not even if you die the greatest hero the world ever saw. Not even if you're so great your name will never be forgotten and who's that great? The most important thing is your life, little guys. You're worth nothing dead except for speeches. Don't let them kid you any more. Pay no attention when they tap you on the shoulder and say come along we've got to fight for liberty, or whatever their word is. There's always a word."
Advertisement:

A 1938 novel by Dalton Trumbo that became a rallying point for the political left after World War II. It follows a young man named Joe Bonham, who, after becoming grievously injured during World War I, is left deaf, blind, dumb, and without any limbs. Throughout the book, Joe reminisces about the life he lost, waxes philosophical on war and conscription, and tries desperately to communicate with the doctors keeping him alive.

A film version was written and directed by Trumbo himself in 1971, staying fairly close to the source material but with new scenes added (we see more of what's going on around Joe in the hospital, for instance). Metallica later bought the rights to the movie so they could use clips of it for the music video to the song "One" (based on the book).