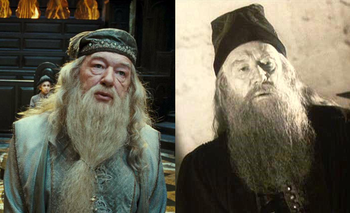 Albus Dumbledore in 1993 and 1945.
"This is the past, and the past is in black and white. Get it?"
— Bugs Bunny, child of a black-and-white cartoon, Cartoon All-Stars to the Rescue
Advertisement:

Ever since the advent of colour photography, the past has been depicted as in black and white, sepia tone or muted colors. Usually invoked for a Flashback or silent film homage. Sometimes made fun of by claiming that the real world was, in fact, black and white prior to the invention of color.

A Sub-Trope of Flashback Effects. See also Deliberately Monochrome, for when the entire work is this way, and Decade-Themed Filter, for when this filter evokes an era.