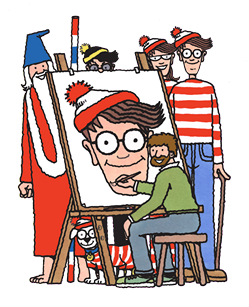 Where's Wally? (titled Where's Waldo? when exported to North America) is a series of British Picture Books by Martin Handford where each page is a complex scene filled with hundreds of tiny people. The goal is to find Wally/Waldo, a man in glasses, a bobble hat and a red-and-white striped shirt, carrying a cane. Each page has a short flavor text where Wally/Waldo describes his adventures, pointing the reader to other, usually humorous, things to look for. In other words, a non-electronic Hidden Object Game.

The Where's Wally/Waldo? books include:

Aside from Wally/Waldo, recurring characters include his friend Wenda, his nemesis Odlaw, his dog Woof (who is usually hidden except for his tail) and the Wizard Whitebeard.

Spawned a short-lived Saturday Morning cartoon show that aired on CBS which justified its connection to the books by having a "find Waldo" puzzle before each act break. These were often much harder than the ones in the books, not because they were particularly complex, but because the low resolution on televisions at the time made finding small details (like Waldo) a trying tasknote if only they had waited until the HD era of TV.... Also had an NES game which had an even worse resolution (everything was 8-bit).

A Google Maps interactive mini-game version of Where's Wally/Waldo? appeared in the app on April 1, 2018. A few days later it was announced Dreamworks Animation Television would be producing a new animated series, which started airing on Universal Kids in Fall 2019.