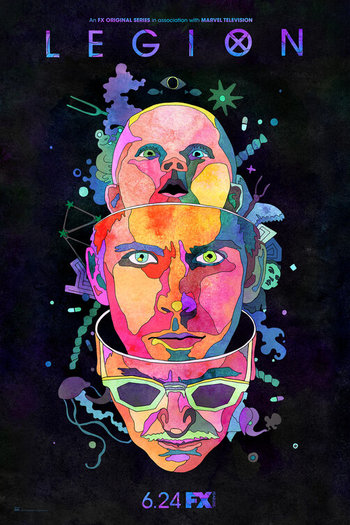 "A delusion starts like any other idea, as an egg. Identical on the outside, perfectly formed. From the shell, you'd never know anything was wrong. It's what's inside that matters."
"He believes he's mentally ill, but he may be the most powerful mutant we've ever encountered."
Advertisement:

Legion is a Superhero Horror-Psychological Thriller television series based on the X-Men character of the same name, created and executive produced by Noah Hawley (Fargo). The show was designed with a three-season run in mind, running from 2017 to 2019 on FX.

David Haller (Dan Stevens) is a diagnosed paranoid schizophrenic who has struggled with mental illness since his late childhood. When he meets a similarly-troubled woman (and fellow patient) named Sydney Barrett (Rachel Keller), he's confronted with the disturbing possibility that there's more to his schizophrenia than he believes: that the voices he hears and visions he sees are actually real. Aubrey Plaza and Jean Smart also co-star.

Despite being a co-production between 20th Century Fox (the X-Men Film Series) and Marvel (the Marvel Cinematic Universe), Legion is said to be set in neither of those continuities, but rather, its own parallel universe. Despite references to outside continuity, the series is designed to stand on its own.