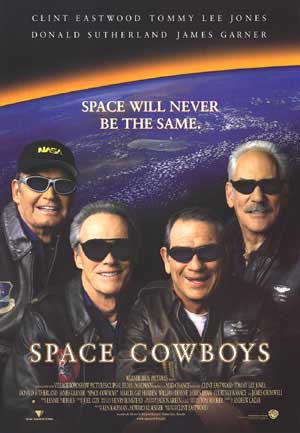 Space Cowboys is a movie directed by and starring Clint Eastwood, Tommy Lee Jones, Donald Sutherland, and James Garner, released in 2000. It tells the story of a four-man team who, while test pilots for the USAF in the 1950s, missed out on their chance to join the American space program, but who get another chance 40 years later.

It turns out that one of them had devised a satellite system that was stolen by Soviet spies. They ended up using it for their own satellite, which they say is a large communication satellite, too large to be carried back to Earth in a shuttle. Seventeen years after its launch, its orbit is decaying, and the Russians are being surprisingly insistent on having the satellite fixed, saying that its loss could cause a catastrophic breakdown in Russian communications, and at worse, touch off a civil war. The only person who can do the job is the original designer - who agrees, but only if his three old buddies come along as well. Hilarity Ensues as NASA must prepare the oldsters for the trip.

Not to be confused with Space Truckers, or stories that contain cowboy-style people in space - see Space Western.