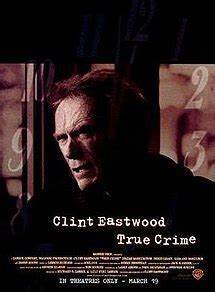 True Crime is a 1999 film directed by Clint Eastwood, starring Eastwood, Isaiah Washington, James Woods, and Denis Leary. It is based on based on the 1995 novel of the same name by Andrew Klavan.
Advertisement:

Veteran journalist Steve Everett (Eastwood) recovers from alcoholism, while working for The Oakland Tribune. His friend and colleague Michelle Ziegler dies in a car accident. Michelle was covering the execution of Frank Beechum (Washington), a black man who was convicted of murder. Everett stands in for his deceased colleague. Soon he gets convinced that Beechum is innocent.