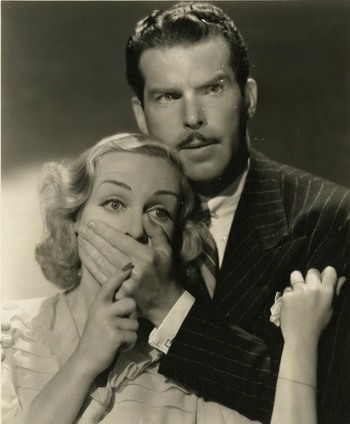 True Confession (1937) is a Paramount Screwball Comedy starring Carole Lombard and Fred MacMurray, their last screen pairing. Notable for being Lombard’s last Paramount film before becoming a free agent, a rarity in the studio dominated industry.

Helen Bartlett (Lombard) is an aspiring writer who has one problem: she’s a pathological liar, and in all her endeavours to help her husband, Ken, she always makes matters worse. Ken’s law firm is struggling to find clients, so they’re broke, but under no circumstances does he want his wife to work. Helen, on the other hand, knows that they need more money, so she goes behind Ken's back to get a secretarial job with an old friend of the family, Otto Krayler. The only problem is that Otto is murdered, and Helen becomes the prime suspect.

Screwball hijinks ensue as Ken decides to be Helen’s defence lawyer even though she didn’t commit the crime, and a man, Charley (John Barrymore), becomes strangely invested in their lives.